Edit this page on Github

You'll probably spend more time debugging your next application than physically typing out the code required to run it. For a little while, the premier tool in the software industry for text manipulation, Neovim, was woefully behind IDEs like VSCode in it's debugger implementation. That's no longer the case.

This post is meant to serve as a basic guide for setting up a debugger in Neovim. Although it applies specifically to Golang, the principles are the same for debuggers for other languages, so long as they implement the Debug Adapter Protocol.

The Debug Adapter Protocol, or DAP, is a set of rules for how a debugger communicates with a client (usually an editor). Microsoft's summary puts it succinctly:

Translating this to a specific language like Golang, we need the following pieces:

In order to debug a program you need a debugger. This is the tool, typically but not always a binary executable, that runs completely outside of Neovim and attaches to the running process you are trying to debug. To debug the application, I'm going to use the Delve debugger.

The program that I'm going to "debug" is a simple TCP server implemented in Golang. You can get the same source code here or you can use your own program.

You can compile and run the TCP server by navigating to the root directory, and running:

The equivalent command with Delve, which compiles the program with the correct debugger flags, and then starts that binary and attaches, is the following:

With delve attached, you can then step through the code in a REPL-like environment.

After adding Mason to your Neovim configuration (I'm using Packer to manage my plugins), open up Mason's UI with the :Mason command, and navigate to the DAP page: 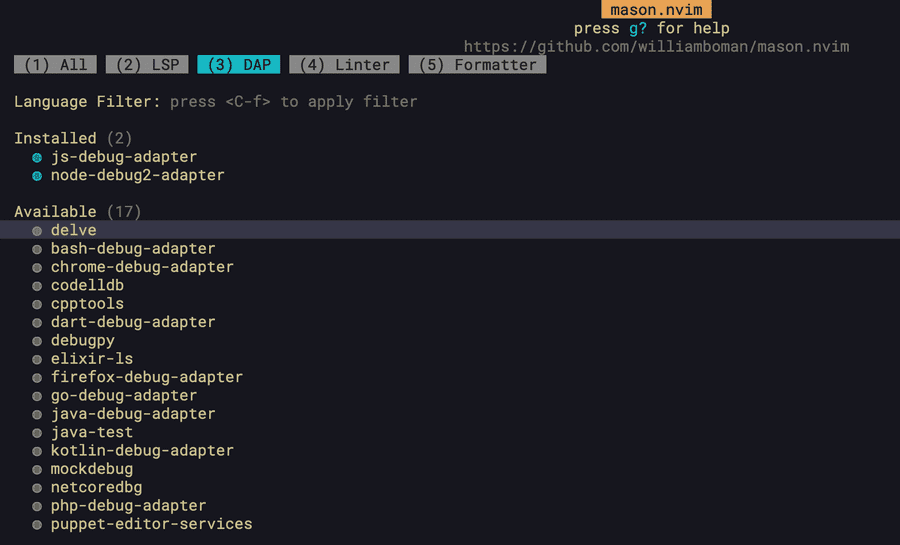 Install the delve debugger by pressing the i key to install it. Once the debugger is installed, you should be able to see the binary in Mason's standard binary path at ~/.local/share/nvim/mason/bin. In a terminal window, run the following command to prove it's been installed:

Great! We know now that delve is installed on our machine at the specified path.

This next part is optional. Skip it if you'd like.

This is all fine and good, but we can actually use another plugin for mason to specify the debuggers we want installed automatically, called mason-nvim-dap. Install this and add the following line to your Neovim configuration file:

This is great, because it allows us to specify the automatic installation of debuggers directly within our Neovim configuration. Not all debuggers available by Mason are included in this extra extension, so just be aware of that.

Next, we need to install nvim-dap, the plugin that will actually allow Neovim to communicate with Delve.

Once you have it installed, let's see nvim-dap "breaking" before we understand how to get it working. Install nvim-dap, and open up the main.go file in your project and run the following ex command: :lua require("dap").continue()

You should see the following message:

What's going on here? We've installed the debugger, and the debugger adapter for Neovim, but we haven't told nvim-dap what do to for Golang files yet. As the documentation states: "Neovim needs to instruct the debug adapter .. how to launch and connect to the debugee. The debugee is the application you want to debug."

Add the following to your configuration:

Now, run the same command. You should see a different error message:

We should finally be set up and ready to run the debugger for real. Hover over a line in the main.go file and set a breakpoint with :lua require("dap").toggle_breakpoint() then re-run the above command to start the debugger.

Nice! This shows that we've successfully set up delve to launch via Neovim. This is the first step! Finally, close and terminate the debugger with :lua require("dap").terminate() which will close the delve process and terminate the connection.

The default experience with DAP is pretty rough without a better interface, and keybindings to start and stop the debugger, set breakpoints in the code, and so forth. Luckily, this is very easy to configure with nvim-dap-ui. This is the configuration that I like.

I also have the following keybindings set up to call functions in both plugins:

We now have a nice interface that lets us step through the code, view breakpoints, and so forth. Here's what the full setup looks like on my machine: 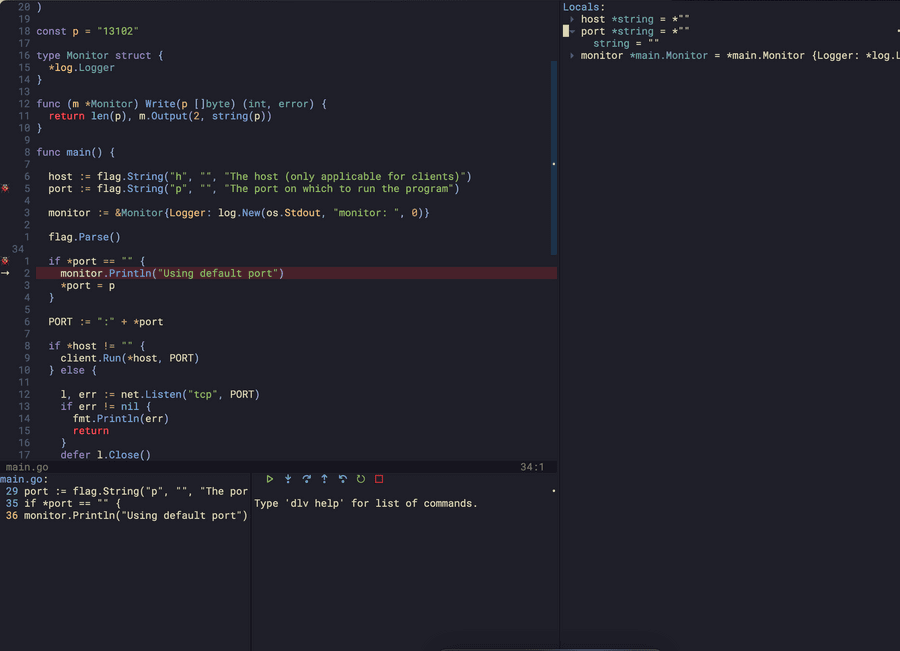 They look like this, and nvim-dap will ask me which of the configurations I'd like to use when I open it on a Golang file:

Repeating this for NodeJS

The above pattern lets us easily set up debuggers for a variety of different languages and tools. For a full list of the supported configurations you can go here.

For instance, let's set up a debugger for Node (server-side Javascript) now.

First, let's add the debugger to our list of required debuggers (if you skipped this step earlier you can just install it manually with Mason):

And finally an entry to our dap.adapters table for the debugger that we just installed:

Now we can open up Javascript files and set breakpoints and inspect code the same way we did with Go! You can see now why DAP is a powerful framework that lets us easily abstract away langugage-specific debugger implementations!

We've now walked through the installation of the debugger, the debugger adapter, configuring the debugger, and adding a UI layer. If something goes wrong during your own setup, check Neovim's messages, and also DAP's logs with :DapShowLog.

It's worth mentioning that you can achieve configuration of the debug adapter for Go specifically with nvim-dap-go, which will effectively write the dap.configurations.go and dap.adapters.go sections of your DAP configuration for you. You'll still need to install the debugger (delve) in order to use it, and the UI. If you prefer a more out-of-the-box configuration for Golang specifically, this plugin is quite nice.

Finally, you can find my personal dotfiles here and specifically my debugger configuration here.